Find the Top Ten Scripts Submitted to the Script Repository

Summary: Learn which scripts submitted by the community to the Scripting Guys Script Repository rank in the top 10 for 2011.

NOTE: Tomorrow I will be speaking at the first meeting of the Madison PowerShell Users Group via live meeting. If you are local to Madison Wis. please join the group in person or remotely through this link. 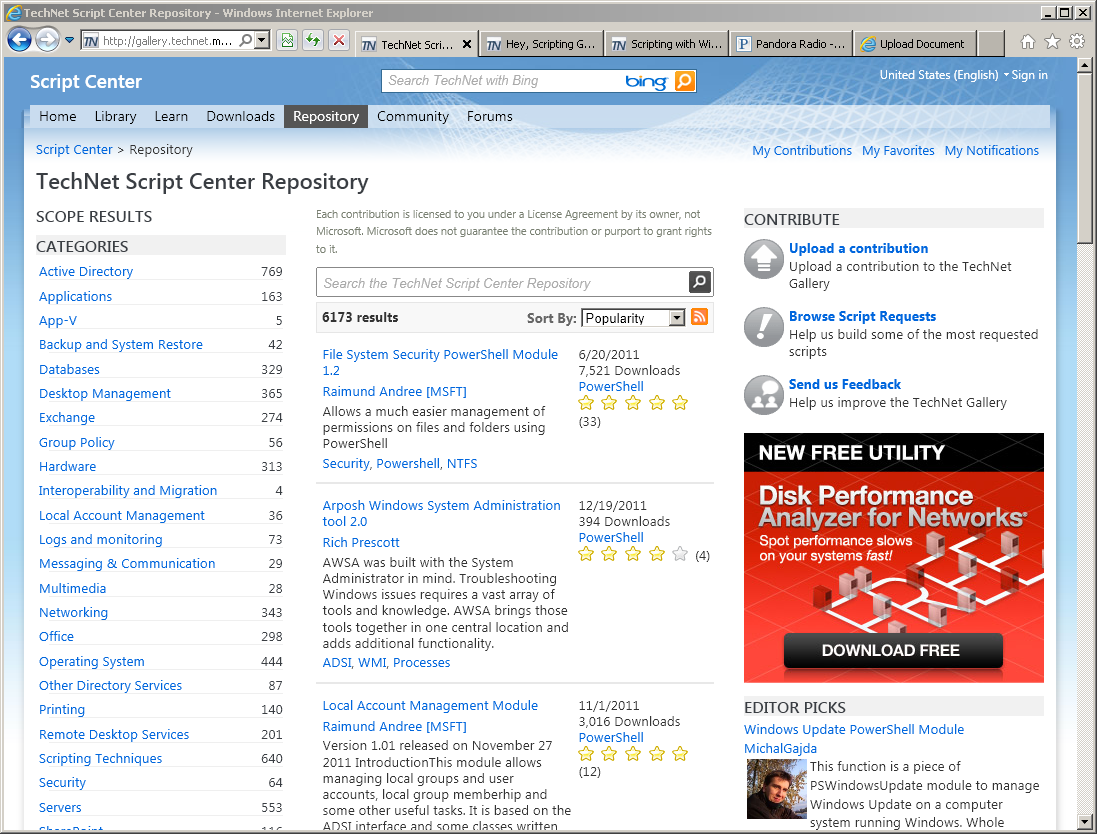 Without spoiling the plot, I can tell you that nine out of the ten top community submitted scripts use Windows PowerShell. So here are the details…

Microsoft Windows PowerShell MVP and honorary Scripting Guy, Sean Kearney submitted the number one script for 2011. His script, List Inactive Computer Accounts in Active Directory is a very short script that lists computers that have not been active within a specified number of days. The script defaults to 90 days, but it is configurable.
Sean’s blog:  PowerShell: Releasing the Power of Shell to You

At number four, we have a script by Greg Lyon that uses Windows PowerShell to back up files. The Backup Files Using Windows PowerShell script is made up of several functions, and it prompts prior to commencing the backup. To use the script, you need to manually edit the source and destination variables to match your configuration.

Checking in at number six is a simple one-liner written by Kent Finkle called Create a Folder Using Windows PowerShell. Of course, creating a single folder in Windows PowerShell does not require a “script.” In fact, it can be accomplished as simply as typing md myfoldername—but, hey, this script had a huge number of page views this year.

The number seven script submitted to the Scripting Guys Script Repository is the Client System Administration tool (v1.0.2). This way cool Windows PowerShell script submitted by Rich Prescott, is more than 1,600 lines long, and it features a nice graphical user interface. What is truly amazing about this script is that it has not been live very long—in other words, it has quickly risen to the number seven script position. On January 6, Rich Prescott will be our guest blogger, and you can read his explanation of this script. The blog is excellent; I’ve already read it.
Rich’s blog: Engineering Efficiency: Scripts, Tools, and Software News in the IT World

The number nine community submitted script is called Automate RunAs Password Entry, and it is actually a VBScript script. This script uses the sendkeys method from the wshshell object to automatically type in the password to use when calling runas. It also has examples of opening Internet Explorer and navigating to a web page. The script was written a couple of years ago, and it obviously is something people are interested in. Unfortunately, as written, the script is not a very good idea, and the reliance on using sendkeys is somewhat error prone. Alternatively, there are a number of Hey, Scripting Guy! blogs that talk about working with the Internet. For working with passwords, you might take a look at Importing and Exporting Credentials in PowerShell, which is a great blog written by Lee Holmes.

Rounding out the top ten Scripting Guys Script Repository community submitted scripts for 2011 is the Enumerate Active Directory User Object Information script written by Trevor Hayman. The script retrieves a ton of information about users in Active Directory. The script does more than simply query AD, so maybe you should check out why it has received 17 five-star ratings.

I want to congratulate each person who has a script that is listed here today. If I did not include a link to your blog, please contact me via the scripter@microsoft.com email address. Join me tomorrow when I will talk about the top ten Scripting Wife blog posts from 2011. The Scripting Wife blogs, as you may recall, chronicle the experience of a non-computer professional who decided to learn Windows PowerShell to compete as a beginner in the Scripting Games. They are funny, and they are a great way to learn Windows PowerShell.