In this release we closed 80 issues, and it includes:

A rich Python editing experience (in the browser!) via github.dev

We are delighted to announce that as of this release you can enjoy the performant editing experience of Pylance in the browser via github.dev. If you are unfamiliar with github.dev, you can head over to any repo, pull request, or file on GitHub and hit ‘.’ on your keyboard (or change the URL to github.dev) to give it a shot!

We’ve added support for the core editing features you might want when exploring a new codebase or making minor edits to your Python code. These features include:

You can check out Dan Taylor giving a demo on the Python Bytes podcast of this new experience if you’d like!

We’re excited for you to give this new experience a try and welcome any feedback on the Pylance issue tracker.

Although running Python code in the browser isn’t yet supported, you can do so in a Jupyter notebook with the vscode-pyolite extension (in preview), made by one of our team members!

We’re excited to announce that we have revamped the look of our Python testing features by utilizing the built-in test explorer in VS Code. You can now enjoy a more stable UI experience for test discovery, navigation and status rendering, as well as new features such as test search, run a selection of tests, rerun last executed test, and more. With this change alone, we have closed 55 issues on our GitHub repo!

Once the Python extension activates, you will see the Test Explorer on the activity bar. If you haven’t configured the testing features, you will see an option to do so on the welcome view: Once the testing features are configured, the Python extension attempt to discover tests. Once they’re discovered, you will see your tests listed on the test explorer: 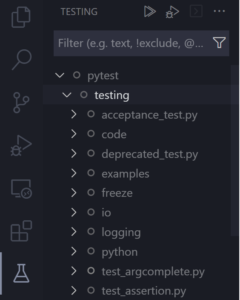 Tests are now discovered automatically by default whenever you add, delete, or update any python file in the workspace. You can disable that functionality by changing the “python.testing.autoTestDiscoverOnSaveEnabled” setting to “false”.

Although we’ve retired the code lenses, there are still more options for you to run and debug your tests:

By hovering over the test items on the test explorer and clicking on the corresponding icons, as well as through the icons on the top right of the test explorer to run and debug all of the discovered tests. And now you can also run a selection of tests by Ctrl + clicking (or Cmd + Clicking if you’re on macOS) the ones you’d like to run in the explorer, and then clicking on the run icon for one of the tests in the selection:

Although we’ve retired the code lenses, you can still run and debug tests in the editor by clicking on the gutter decorations. You can also right-click on them to debug the tests instead (and you can even change the default behaviour what clicking on the decorators will do to through the “testing.defaultGutterClickAction” setting).

To configure the debugger for tests, you can specify “purpose”: [“debug-test”] in the launch.json file in the .vscode folder from your workspace.

For example, the configuration below in the launch.json file disables the justMyCode setting for debugging tests:

We now have new commands that can be particularly helpful when you’re creating or modifying tests. We often want to run the same test method a couple of times when we’re creating it. To make that simpler and more accessible, you can use the “Test: Run Test at Cursor” command to run the method where you have the cursor at in the editor (and you can even add a keyboard shortcut for it so you can more easily do so!). Similarly, you can run the “Test: Rerun last run” command if you want to run the only last test you have executed.

Because we’re leveraging VS Code’s new testing API, a few of our testing commands have changed. If you are used to our old test commands or have key-bindings set up for them, you can reference our documentation to see what the corresponding new commands are.

New button for running and debugging files on the editor

We improved our “run button” on the editor to also include debugging files as an option. When you click on the icon it will run your active Python file in the terminal by default, but you can click on the down-arrow to change the action to debug it instead:

You can also customize the action for what the debug icon does by creating a launch.json file and adding “purpose” : [“debug-in-terminal”] to your Python configuration.

For example, the configuration below enables stepping into non-user code when debugging through the debug icon on the editor:

One thing to note is that this will only work for debugging files through the debug icon on the editor – it will not work when starting the debugger through the Run and Debug view or through F5.

Our IntelliSense support for Python 2.7 users comes from Jedi 0.17, which came out over a year ago and is the last release of Jedi that supported Python 2.7.  Since that time, we have begun using (and contributing to) jedi-language-server, which puts Jedi behind LSP. This has given Jedi users better performance, refactoring and code navigation capabilities, but is only available for Jedi 0.18.

You can check our wiki page to learn more about the reason behind it and what you can do if you’re still using Python 2.7 in VS Code.

In the June 2020 release, we announced our team’s investment in Pylance, a new more performant and feature-rich Python language server, and the eventual deprecation of our legacy language server, the Microsoft Python Language Server Since this announcement, our team has worked hard to improve language server support in both Pylance and the open-source language server, Jedi.

With Pylance now as the default language support for Python for Visual Studio Code, almost all of our users have switched to our new language server. As such, the Microsoft Python Language Server will reach end of life with the November release of the Python in Visual Studio Code extension. After deprecation, the Microsoft Python Language Server repository will be marked as archived. This will still allow you to fork and build upon the language server’s codebase if you’d like.

If you are still using this language server (your python.languageServer setting is set to “Microsoft”), you will now see a prompt asking you to choose a new language server – Pylance (recommended; default) or Jedi (open-source). Upon selection, your python.languageServer setting will be appropriately updated in your settings.json to reflect your choice. If at any point you want to try something new, you can do that by updating your settings. If by the November release you have not yet selected a new language server, your language server will automatically flip to the default language support for Python in Visual Studio Code – Pylance.

We’d like to thank all our Microsoft Python Language Server users for their feedback and support over the last couple of years. Your input helped shape what we believe is the best language support for Python in Visual Studio Code ever.

And huge thanks to this month’s contributors:

Luciana Abud
October 7, 2021
6 comments
Anaconda licensing for Microsoft products and services
Our friends at Anaconda have posted a joint announcement last week regarding the use of their repository from Microsoft cloud-hosted products. See the full announcement ...