NuGet: In the Platform

I recently declared that NuGet is “Broken By Design.” Now, that was hyperbolic; I don’t really think NuGet is broken. In fact, I’m very pleased with NuGet (and proud of it). But I wanted to make the point that NuGet’s approach both earned it success but also came at a cost. NuGet can’t presently offer some expected package management features because it’s merely a package management façade over top of existing Visual Studio and MSBuild capabilities.

I also wanted you all to know that we recognize that NuGet has been stagnating and that we want to make some changes.

For years, many have questioned the approach NuGet took bolting onto Visual Studio and MSBuild. Knowing the approach has led to being unable to provide some key new features, was it still the right approach?

I whole-heartedly believe that the bolt-on approach that NuGet took directly led to its adoption and success. We do not at all regret the direction we went.

Only because our collective users are demanding new features do we think we can now make NuGet part of the platform. Putting package management into the platform will result in some changes to how users build projects for the Microsoft development platform. Until recently, we didn’t have the feedback indicating that our users were ready to accept the changes required; we now believe some disruptive changes will be welcomed.

Because project files end up with Hint Paths specific to target frameworks selected at package installation time, re-targeting your project can cause the Hint Paths to be stale. Additionally, you cannot multi-target the project by passing the target framework as a parameter to MSBuild, because the framework-specific Hint Paths are burned in for a single framework. To make this scenario work, MSBuild will ensure NuGet selects the libraries in the context of the consuming project, regardless of whether the package is a direct or indirect dependency.

NuGet presently understands managed assemblies and getting references added to them. You can include assemblies in your package that don’t get references, but the capabilities are quite limited. Furthermore, NuGet presently supports only pivoting your assembly selection by Target Framework/Version.

With NuGet packages being a fundamental concept, the .NET team wants to ship more and more of their work as NuGet packages. And the C++ team wants to be able to use NuGet packages for their libraries as well. In order to satisfy the requirements that come in these scenarios, NuGet must allow new artifact types to be expressed in packages so that those artifacts can be exposed to the build.

We are still working on the design for this, but we anticipate NuGet packages being able to express artifact groups that can pivot on the following properties:

For those of you familiar with Extension SDKs, you’ll notice the similarity. We plan to implement this as though NuGet could support arbitrary pivots, but we know of concrete scenarios for the properties listed above.

NuGet Will Gain a First-Class Presence

What needs to change to make all of this happen? What does “putting package management into the platform” mean? Why is it disruptive? What is going to change?

We plan to change Visual Studio and MSBuild to understand the concept of package management; NuGet will gain a first-class presence. Here are some of the areas and features that will be affected:

We are working on a design where MSBuild, for all project types, will understand that projects can have NuGet packages installed. MSBuild will understand that the installed NuGet packages can have assemblies and other artifacts that need to be included in the build, and that build and environment properties can alter which artifacts need to be included.

We expect the design will arrive at a workflow along these lines:

This approach is very similar to what ASP.NET vNext is already doing.

Here is some of our thinking for future features that could be introduced.

We could change packages.config to only include direct dependencies, rather than packages that are brought in as indirect dependencies. We would then perform dependency resolution at compile time when MSBuild queries NuGet for the list of installed packages.

Much like resolving dependencies at compile time, we could also choose package versions at compile time. Your package manifest could contain version ranges such as [2.4.0,2.5.0) so that the newest patch version of 2.4.x could be selected on each build.

While this feature is frequently requested, it can cause you some headaches too; it would be an opt-in feature.

For floating versions and compile-time dependency resolution, it would be important to allow you to override the variability of resolution, locking the build down to specific packages/versions when desired. We expect to add support for a packages.lock.config file that would take precedence over packages.config when NuGet is looking up the package manifest.

With this approach, you could easily commit a lock file into a release branch, but leave your development branch open. Of course, NuGet.exe would offer a feature such as nuget.exe lock where the resolution would execute and a packages.lock.config file would be written out for you.

A lot of users have requested that we move away from the XML-formatted packages.config file, and instead adopt JSON for our package manifest. With MSBuild querying into NuGet for the list of packages installed, we leave the door open for making this switch. And it’s quite possible that instead of determining how we’ll extend packages.config to support the new features of direct vs. indirect dependencies and floating package versions, we’ll instead create a nuget.json file that has these concepts. We’re even considering a merger of our nuspec file and this package manifest, along with potentially aligning with ASP.NET vNext’s project.json file.

If we go down the path of using a nuget.json file, we’d of course then use a nuget.lock.json file for the manifest locking.

Here is the layout of files that NuGet is managing package reference information in:

We want to consolidate this package reference information into one place. Here’s a potential approach for doing so:

We considered putting the package manifest directly into the csproj file, as <NuGetPackageReference> items, but that would come with a few drawbacks:

For these reasons, and to enable the ideal situation of NuGet not needing to update csproj files at all when a package simply contains assemblies, we concluded it’s far better for NuGet’s package manifest to be separate from the project file itself. Of course, the separate package manifest should help with cross-platform scenarios too, which should help Xamarin out quite a bit.

We haven’t figured out all of the details for how this will be implemented, or if/how we can update previous versions of MSBuild to support NuGet in this way. We don’t expect the changes will be terribly invasive though, and we expect to use existing extensibility points in MSBuild to light this up. If we succeed therein, then down-level support should be possible. But it is quite likely down-level MSBuild support will land out of scope at first, so we might have to be creative.

We haven’t yet worked out the details for how you’ll transition your project over into the new “build-enlighted” NuGet package consumption mode. There will certainly need to be some sort of gesture to convert, but we don’t know what it will look like yet.

Several changes are being made in Visual Studio to make NuGet a first-class citizen in the environment.

During the Visual Studio “14” timeframe, the NuGet team is designing a brand-new package management user interface. Our 4-year-old modal dialog that inherits from the Extensions and Updates dialog is getting completely replaced. Our new user interface is a document window that behaves similarly to the Project Properties window, although it looks completely different. 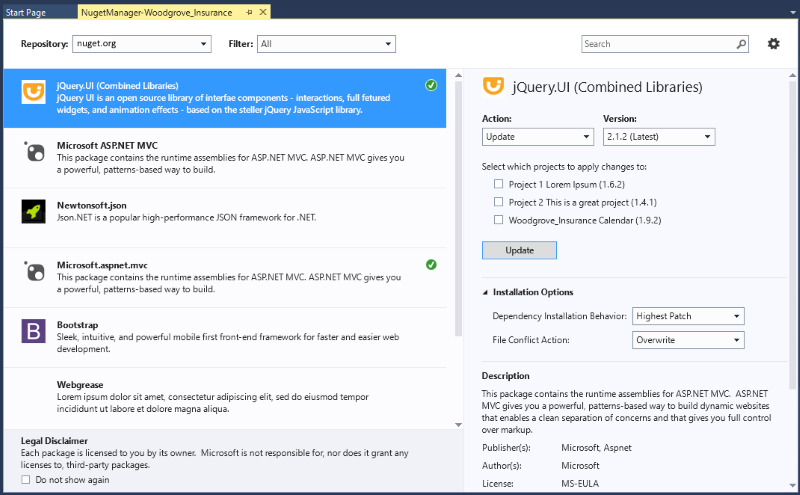 Here are some of the new features available in the new user experience:

After NuGet 3.0, we hope to update the UI again to show what artifact types the NuGet package carries. For instance, you could see ahead of time if the package has PowerShell scripts, web.config transforms, or other content files, or if it merely has assembly references. We could even add in installation options where you could disable the execution of the PowerShell scripts or the web.config transforms if desired.

When NuGet was merely bolting onto existing project systems’ capabilities, that resulted in the assemblies from packages being added into a project’s traditional References node; there were no actual NuGet package reference entries.

While we’re not sure when the feature will land, we are going to work with Visual Studio to get NuGet packages to show up as nodes in Solution Explorer. These nodes will provide some context menu items for common actions such as uninstalling and updating packages, which will navigate into the package management UI with the package and action selected.

You’ll see this integration first in ASP.NET vNext projects, and then later across all other project systems.

NuGet In New Domains and Partnerships

In addition to this big drive to get NuGet into the Microsoft development platform, we’ve also recently seen a huge increase in the number of new domains where NuGet is being used as an implementation detail or as a feature within new products. Chocolatey has been around forever, but with the introduction of OneGet, it’s gaining more momentum. Additionally, systems such as Octopus Deploy, MyGet, AppVeyor, scriptcs, and many others have come to NuGet with requests to make our server and client bits more flexible for their scenarios.

While we are working on getting NuGet into the platform, we’re also evaluating how much we should generalize NuGet packaging, libraries, and feeds to serve the needs of the new domains and partnerships. Those topics all fall much lower in priority, but it remains on our minds as we make significant code changes.

We have a lot to do to make all of this happen. We hope you like the plans and that you’ll share your feedback with us eiher way. You have been very patient with us as we waited for the time to be right to change the general approach NuGet took from being a bolt-on to being adopted into the platform, and we do appreciate your patience.

As you can probably imagine, all of this work has the NuGet team pretty well consumed. We’ve fallen behind in reviewing pull requests, issues, discussions, and other forums, and our release cadence has also slowed down significantly. Please bear with us as we remain focused on making big changes. If you’d like to get more involved in the project to help us get through this transition, please let us know how you’d like to help.

Package Manifests
As we work on the designs for getting NuGet in the platform, it has become clear that NuGet needs better support for carrying arbitrary artifacts in packages and exposing...