NOTE: This blog was originally posted to the Apps on Azure blog for the initial preview and Visual Studio 2022 support.

For those developers who are looking into building serverless functions in Azure with the latest innovation from .NET runtime, this makes it possible for all developers on the planet to focus on coding with .NET 7 new features, ready-to-code while on a large scale without worrying about the underlying infrastructure.

You can now build your serverless applications with .NET 7 in Azure Functions using the .NET Isolated Worker model, which provides an isolation model that decouples your function process from the Azure Functions runtime, bringing the flexibility needed to target different versions of .NET, more efficiently manage dependencies and service registration.

The isolated worker model also allows you to use current .NET behaviors for dependency injection and incorporating middleware into your function app. Choose the isolated model if you’re upgrading from .NET 5 Azure functions v3. This feature is available for preview in all Windows & Linux-based plans in addition to premium plans.

How to try it out?

To get started, we could leverage Azure Functions Core Tools to scaffold an isolated project folder structure as follows:

And then you can use the func start command to test out this function.

Visual Studio makes it easier for all developers to build serverless applications with Azure functions by streamlining the function creation workflow, with rich local development and debugging experience, and quickly publishing your .NET applications to Microsoft Azure.

Follow the Visual Studio update process on the official documentation, and ensure you’re compliant with all the prerequisites before you update. Note that, you need to set your update channel to Preview in your More -> Update settings from Visual Studio Installer as the following: 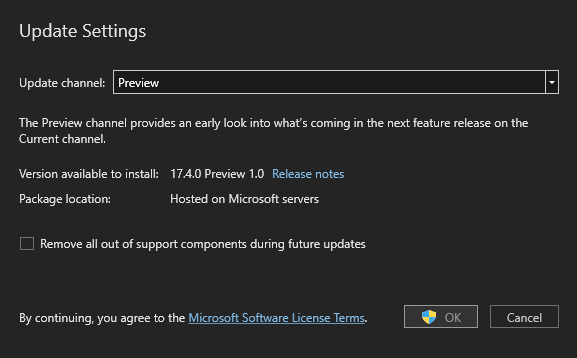 When you create a new Azure Function in Visual Studio where you’ll find a new option for .NET 7 Isolated: 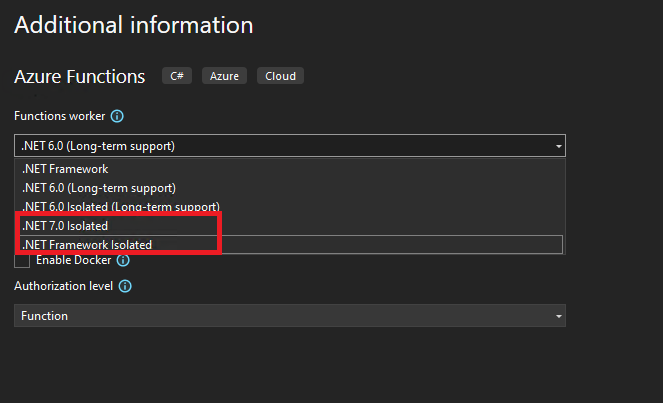 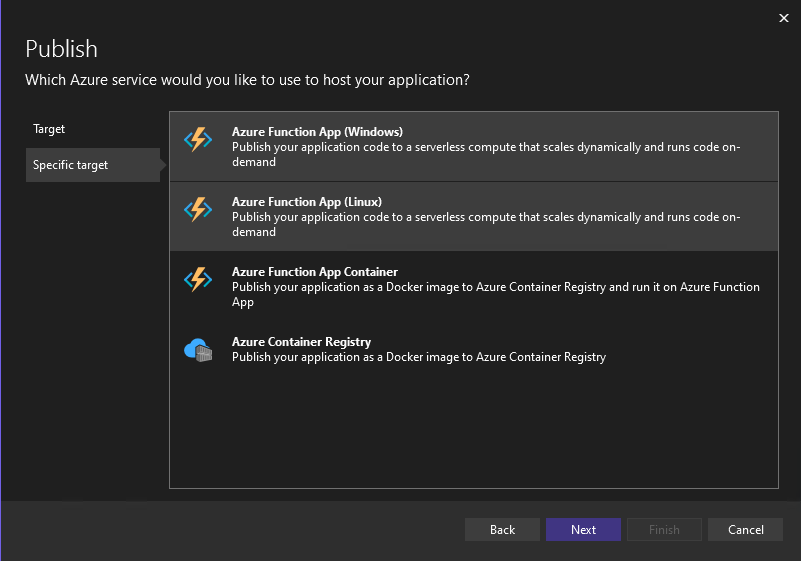 We’re looking forward to hearing your feedback and your use cases, please feel free to share them on announcement related discussions. Also, if you discover potential issues, please record them on the Azure Functions .NET language worker GitHub repository.

Coming up, we’re also closely collaborating with the community and ensuring your voices are heard, check out our public-facing product roadmap from: http://aka.ms/af-dotnet-roadmap.

Start to build your serverless applications with .NET 7, check out the official documentation:

If you are interested in learning more about Azure Functions v4, be sure to watch the recent On .NET episode with Matthew Henderson & Fabio Cavalcante from the Azure Function team.

We’re excited about the road ahead with the continued innovation from .NET on Azure functions.