Visual Studio Team Services (or Team Foundation Server) is a bundled suite of DevOps tools that can also integrate with other tools used by your team.  Its REST APIs, hooks, and extension points are frequently leveraged to build custom integrations.  Team Services also includes a growing list of preinstalled integrations.  One of its integrations is with Jenkins, a leading automation server used for Continuous Integration (CI).  Team Services integration with Jenkins allows using both CI systems with traceability through a single DevOps platform.  This post summarizes Team Services’ initial capabilities of integrating with Jenkins.  Supported scenarios include:

There are multiple ways to use Jenkins as a CI server with Team Services.  Jenkins’ built-in Git Plugin or Team Foundation Server Plugin can poll a Team Services repository every few minutes and queue a job when changes are detected.  For those who need tighter integration, Team Services provides two additional ways to achieve it: 1) the Jenkins Service Hook, and 2) Jenkins build and release tasks.

Team Services adds capabilities over the Jenkins Service Hook by including connectors that allow its build and release systems to integrate with Jenkins.  These connectors can be chosen from the list of tasks to execute as steps in a Team Services build or release definition (Figure 2).

In effect, a Team Services build or release will queue a Jenkins job and download resulting artifacts.  Because these tasks execute in a light-weight, long-polling agent that can be installed in your data center, there is no need to modify inbound firewall rules for Team Services to access your Jenkins server from the cloud.

The Jenkins Queue Job task (Figure 3) queues a Jenkins job by name.  It can wait for the job to complete or immediately continue to subsequent steps.  Multi-branch pipeline jobs and parameterized jobs are also supported.

Downstream jobs and multi-branch pipeline results are displayed in the Team Services Build or Release Summary for traceability (Figure 5).

Jenkins credentials are configured with a Jenkins Service Endpoint that is shared throughout your team project (Figure 9).

The Jenkins Download Artifacts task (Figure 10) makes it easy to download build artifacts from Jenkins and integrate them into your Team Services build or release process.  Once artifacts are downloaded, they can be used by other tasks as demonstrated in the video below.

Team Services allows creating branch policies that require a successful build before any code can be submitted into a branch (Figure 11).  For Git repositories, this requires using a pull request to merge changes into the configured branch.

The previous examples describe using Team Services to queue a Jenkins job and download resulting artifacts for subsequent use within a Team Services build or release definition.  Jenkins can also independently trigger a Team Services release.  After installing the Team Foundation Server Plugin on your Jenkins server, you can configure the Jenkins post-build action named Trigger release in TFS/Team Services to initiate the release (figure 14).

Traceability Between Jenkins and Team Services

You can maximize traceability by installing the Team Foundation Server Plugin on your Jenkins server and configuring two post-build actions (Figure 16).

Traceability is available as follows:

Links from Team Services to Jenkins

The Team Services repository status shows whether the last Jenkins build succeeded for the current branch and links to recent Jenkins builds for the branch: 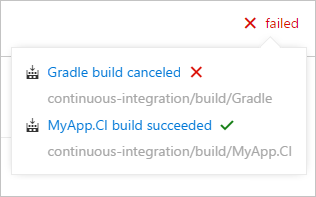 Team Services pull requests link to the Jenkins build that validated them:

Team Services work items (such as user stories and issues) link to the Jenkins builds in which their associated commits and pull requests were built:

Links from Jenkins to Team Services

A Jenkins build links to the Team Services build that queued it:

A Jenkins build links to the Team Services branches and commits that were built:

A Jenkins build links to its associated Team Services pull request and work items (such as user stories and issues):

How Can We Improve?

We welcome your suggestions for improving Team Services integration with Jenkins.  We are continuing to enhance it and already have a few ideas:

The Jenkins Queue Job and Jenkins Download Artifacts tasks are open source.  Contributions are welcome, and you can use these patterns to create your own extensions in the Team Services Marketplace.  To make suggestions or report issues, reach out to us on GitHub.

For information about Team Services integrations for Java, including plugins for Eclipse, IntelliJ IDEA, and Android Studio, visit java.visualstudio.com.

Team Services Extensions Roundup – April
A 6 month high of 30 new Visual Studio Team Services extensions got added to the Marketplace in April. It was really hard to only pick two from such a big set so I ...