Autonomous Driving is a competitive market with complex security and processing challenges. This article highlights how a Microsoft CSE dev crew approached the concerns and constraints when developing a cloud-based Autonomous Driving re-simulation solution. 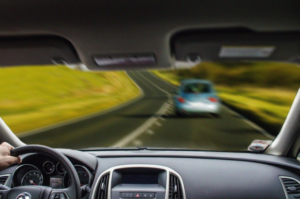 Once considered a dream, self-driving cars are nearing reality. Today, multiple companies compete to gain an advantage in this billion-dollar market known as Autonomous Driving. Microsoft is working with the world’s largest car manufacturers to advance Automated Driving (AD).

Over a several year period, Microsoft worked with them to create a re-simulation solution, integrated with a larger autonomous development platform.

Re-Simulation (Re-Sim) fundamentally is a tool which combines three things to virtually replay and evaluate a dataset recorded from a drive:

Re-Sim is massively complex and has required years of development. Seeking government approval of AD raises strict requirements in areas such as safety, data privacy, data versioning, and auditing.

It can be considered an open loop test and validation system for AD functions. It processes recorded raw data from various car sensors through a graph of POs in the cloud. The produced result can then be used to validate data processing algorithms or detect regressions. The POs are a definition of what needs to be executed, provided by the suppliers of the different vehicle sensors. The OEMs combine the sensors together into a Directed acyclic graph that represents the real-world vehicle.

This article is a primer of the fundamental challenges and approaches used to create Re-Sim.

At the beginning of a production cycle, vast quantities of data are collected from car sensors across a fleet of multiple vehicles. One car can produce up to 40TB of data per day. As a result, transferring this amount of data could cause an I/O bottleneck, and incur significant costs. The system needs to avoid copying these enormous amounts of data between different components of the system.

The data is recorded in a specific region, and government mandates have strict requirements on where distinct types of data must be stored or processed. For example, data must be stored and remain in the region/geography where it was collected from the test fleet’s car loggers (in this case an Azure region and geography). Any Re-Sim solution needs to have multi-region compute capabilities and must provide the ability to process the data in the region where it was originally recorded. If not following the data locality constraints, approval for Automated Driving would not pass.

Any solution needs to consider the long-lived nature of a re-simulation job. Depending on the PO requirements, the time it takes to process 1h of recorded data is variable per PO. A complex graph with a lot of recording hours could take weeks to complete.

Additionally, it is sometimes necessary to re-process a single PO within a whole graph. In this case, the system must avoid re-processing the whole graph due to the amount of time it takes and cost it generates. It should only process the data and POs that have been changed or added.

Each PO has specific compute and operating system requirements. Some POs might require a single core on a budget VM, while others require 8 cores on a high memory VM. Picking correctly sized VMs will keep the cost low, while picking the wrong sized VMs (either too small or too large) will increase costs and may be less efficient. It is key to tune the system for optimal use of the resources allocated.

Complexity of the sensor graphs

The sensor graphs within a vehicle can become quite complex. The example here displays a graph of four different POs, where each PO relies on different input, either raw or processed. In reality, the graphs can become more complex and need to be managed dynamically. A typical graph consists of 5 to 10 POs.

At run-time, the backend uses an embarrassingly parallel architecture to efficiently feed the recorded data through each node in the Re-Sim graph. The orchestration system is built on Azure Batch and Azure Durable Functions, allowing the PO suppliers full control over the virtual machine images running their software. A reliable and resilient control loop orchestrates multiple jobs in various states and ensures that individual failures do not affect other tasks or jobs.

Key parts of the system

When “Full Self Driving” cars will be a reality is unclear, but the progress being made by various companies on Automated Driving is promising. However, it is clear that a lot of effort and money need to be spent on infrastructure and computing systems to support these functionalities. This article only shows a glimpse of the current and future challenges of the car manufacturers, but it is a step in the right direction. The solution presented here is an additional step on that path.

Thanks to Patrick Schuler and Tito Martinez for the in-depth reviews of this article.

Privacy in Medical Systems using FHIR
This post describes how we leveraged the FHIR specification to define a model of ownership for resources and delegation of access to FHIR resources by their owners.

avbalter
March 1, 2022
0 comment
Continuous Integration and Deployment Journey
As an Engineering team on Microsoft’s Commercial Software Engineering (CSE), we strive to empower customers to build and maintain their software-based solutions. A key factor in being successful in our goal is to educate and develop the solution by applying certain Engineering Fundamentals. In this article, we will cover Continuous Integration