WinUI and Windows Terminal have a strong relationship that goes back to the origins of Windows Terminal. This blog post goes into the history and architecture of how these two technologies came together.

When we were in the earliest planning stages for Terminal, we knew right off the bat that we wanted to be able to build a modern application that used the best features the Windows platform had to offer. We wanted to make sure that it was visually consistent with other inbox applications and followed Fluent Design principles.

We made the choice to build Windows Terminal as a UWP application. That would immediately grant us access to UWP XAML and the whole WinUI 2 library, which has native controls, styles, and capabilities built specifically for Windows apps. At the time, “UWP applications” had special restrictions placed on them by the OS. These security features ensured that UWP apps delivered by the Microsoft Store were unable to access restricted locations within the OS, or leave artifacts laying around on disk, to simplify the uninstall process. These UWP apps are all launched inside a “low integrity app container”, which basically means they have effectively no permissions on the OS. They’re not even allowed to change their working directory. They’re allowed to launch external processes, but these external processes are additionally bound by the same restrictions the app is bound to.

Therefore, if we wanted to build Terminal as a UWP app in 2018, then any of the shells that we would spawn (like cmd.exe, powershell.exe or bash) would be unable to do anything to the system. Could you imagine using your shell without being able to change directories, read file contents, or launch any other processes that you could interact with? Obviously, this was a non-starter for us.

We spent a good portion of that year discussing our options with a number of teams across the Windows organization. We considered options like a special restricted capability for launching full-trust processes from a UWP. We tried pushing on allowing UWP apps to run outside the app container. However, most of the routes we pursued ended up either as a gaping security hole, or as something that would require years of effort across the organization. (In fact, many of these discussions helped lead to the effort now known as “Project Reunion“, as well as the WinUI 3 effort that extends the modern UI framework to Desktop apps).

Fortunately for us, the solution was actually closer than we thought. Just down the hall from us was the WinUI team, and little did we know, they had been building XAML Islands for the better part of the previous year. XAML Islands would enable a traditional Win32-style application to host UWP XAML content within its window without the traditional restrictions of a UWP application. As it turns out, this was exactly what we needed.

What we ended up building was an application that was composed of two parts:

This model allows Terminal to get the best of both worlds. As a Win32 application, we’re able to use all of the legacy Win32 APIs that a terminal app might need to launch processes and query the filesystem. We’ve also been able to use the power of UWP XAML and WinUI 2 to help build the UI of Terminal quickly and beautifully.

For a more detailed breakdown of Windows Terminal’s architecture, let’s refer to the following diagram: 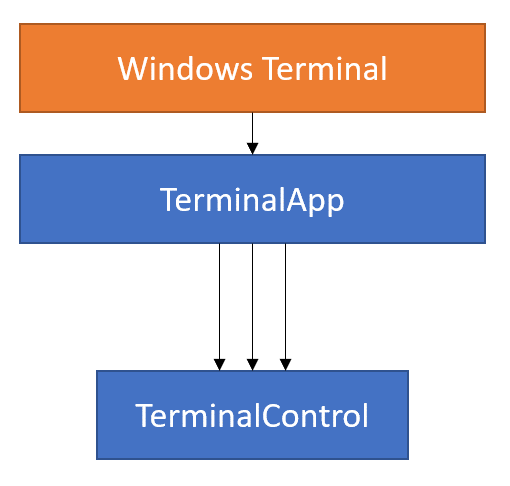 In this figure, the top, orange box is our Win32 layer. This layer builds our final executable, and contains all the logic for manipulating our Win32 window, as well as hosting a XAML island for our XAML content.

The lower two blue boxes are both components within the Windows Terminal application. Both of these two components are essentially just UWP XAML components, which could be hosted in a traditional UWP application. They just so happen to be hosted in a Win32 app for Windows Terminal, but there’s nothing stopping them from being reused in a pure UWP context. In fact, the Terminal repo even builds a pure UWP application that hosts the TerminalApp, to prove that it’s possible to do so.

We knew that we wanted to build the absolute fastest terminal possible on Windows. XAML text elements are quick and convenient, but the WinUI team pointed out that we could achieve even faster performance by rendering our text buffer with a custom DirectX text renderer, so we went that route.

We fortunately had already begun work on a DirectX renderer for the vintage console to replace the GDI renderer. It was relatively trivial then to be able to hook up the renderer we had already to XAML’s SwapChainPanel class. This allowed us to not only render text incredibly quickly on the GPU, but also to reuse a large portion of the console codebase in the new Terminal. This means that improvements to Terminal also improve the inbox console.

That’s not to say that the journey to building a hybrid application was totally pain-free. We’ve hit a few major roadblocks since we started working on Terminal which we didn’t expect going into this process:

One of the key features that Terminal needed was tabs – users expect to have multiple terminals open with tasks running in parallel. Not only that, the tab control needed to look and feel good, just like the tab experience within a browser. When we first started looking at building a tab experience, there was no tab control within WinUI 2, though there was an initial implementation in the Windows Community Toolkit. While this initial C# implementation helped set the API direction for the control, we needed a high-performance, high-polish control that could only be found in WinUI. We worked closely with the WinUI team (who in turn worked closely with various teams within Microsoft such as the WCT folks and Edge team) to define the look and feel of the TabView control built into WinUI 2.

We worked with the WinUI team as well as many designers to define what TabView would look like. We went from having basic sketches to high fidelity mockups that in turn were developed as a working control. Below is a mockup we created while we were still defining what we wanted Terminal to look like.

After working with multiple designers and iterating over many mockups, TabView became what it is today and it is a staple feature inside Windows Terminal.

As Windows Terminal gains more features, we are able to continually work with WinUI to add more controls as these become available. The next big item on the list is the settings UI, which will use many WinUI 2 controls that are available today. This partnership has been fantastic and we can’t wait to continue to improve both Windows Terminal and WinUI with the creation of new features and controls.

– A collaboration between the Windows Terminal and WinUI teams

Access Linux filesystems in Windows and WSL 2
Starting with Windows Insiders preview build 20211, WSL 2 will be offering a new feature: wsl --mount. This new parameter allows a physical disk to be attached and ...